WASHINGTON—Growth in U.S. health-care spending is accelerating after reaching historic lows, a pickup largely attributed to the millions of Americans who have gotten health coverage under the Affordable Care Act.

Spending on all health care increased 5.3% in 2014, according to a report Wednesday from actuaries at the Centers for Medicare and Medicaid Services. That compares with the 2.9% growth in 2013, which marked the lowest rate since the government began tracking the gains 55 years ago.

The return to more robust growth after a slowdown in spending had been anticipated by economists. Still, it is likely to add to criticism that the 2010 health law isn’t doing enough to rein in costs. The report, based on 2014 government numbers and published in the journal Health Affairs, follows five consecutive years where average spending growth was less than 4% annually. 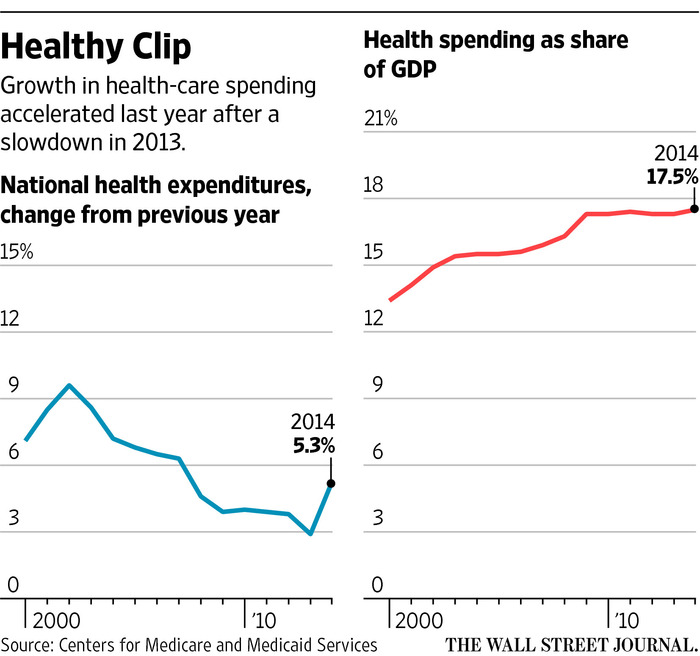 Health-care spending is also driven in major ways by the federal government, which spends more on programs such as Medicaid when costs rise. Medicaid enrollment grew by 7.7 million last year. Federal health-care expenditures also grew 11.7%, or 8.2 percentage points faster than in 2013.

The Obama administration called the escalating growth in U.S. health-care spending temporary and said it hasn’t translated into higher costs for people who already had health coverage.

“Under the Affordable Care Act, millions more Americans have quality, affordable health coverage, and cost growth has remained low,” said Richard Frank, assistant secretary for planning and evaluation at the Department of Health and Human Services, in a statement.

The administration pointed out that the per capita health-care spending growth of 4.5% and overall health spending growth in 2014 were still below the rates seen in many of the years before the ACA’s passage.

Other drivers behind the increase include a rebounding economy, aging baby boomers, and high-price specialty drugs. The aging population is adding to the ranks of Medicare, which covers individuals age 65 and older and the disabled.

Prescription drug spending growth also experienced a rapid increase, to 12.2% in 2014 from 2.4% in 2013. That was due in part to costly new treatments for hepatitis C, cancer, and multiple sclerosis.

Overall, health-care expenditures grew faster than the overall economy in 2014. Out-of-pocket spending, which includes consumer payments such as deductibles, increased 1.3% in 2014.

The Obama administration has sought to credit the slowdown to systemic changes in health-care delivery brought about by the ACA. It has pointed to programs that pay medical providers for outcomes as compared with procedures, as well as Medicare payment overhauls and better health-care coordination.

But some critics dispute that, saying it is too early in the law’s implementation to attribute much of the slowdown to the ACA. Critics of the law maintain that its costs are too steep and that the more subdued pace of growth in 2014 would have taken place even without the law.

Spending may also be tempered in part by the number of Americans who are paying more out of pocket for health expenses through cost-sharing and higher deductible insurance plans. Research shows people tend to spend less—and in some cases delay care—when more of their own money is at stake.

More than half of the midrange “silver” plans are increasing the out-of-pocket costs enrollees must pay, according to a Wall Street Journal analysis of plans in 34 states where the HealthCare.gov site sells insurance. More than 80% of the less-expensive “bronze” plans are doing so.